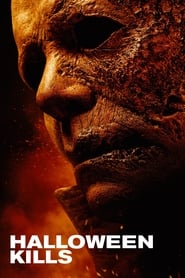 Plot: Minutes after Laurie Strode, her daughter Karen and granddaughter Allyson left masked monster Michael Myers caged and burning in Laurie's basement, Laurie is rushed to the hospital with life-threatening injuries, believing she finally killed her lifelong tormentor. But when Michael manages to free himself from Laurie's trap, his ritual bloodbath resumes. As Laurie fights her pain and prepares to defend herself against him, she inspires all of Haddonfield to rise up against their unstoppable monster. The Strode women join a group of other survivors of Michael's first rampage who decide to take matters into their own hands, forming a vigilante mob that sets out to hunt Michael down, once and for all.

This is a sequel to the 2018 version of Halloween. Which was a direct sequel to the original Halloween from 1978. Yes, it's probably quite confusing as there was a Rob Zombie reboot series (Halloween and Halloween 2) and a whole boatload of other Halloween sequels after the first one.

All that gets thrown out. This is the new, current Halloween canon. In this one Michael has escaped from his doom once again and now he continues to go on a killing spree. There are parts of the film where he is without his mask, and you only catch glimpses of his face. Most of the actors from the original movie make a return, which in itself is pretty amazing.

So as somebody that's seen a lot of the movies.. this is one of the better ones? I would recommend it if you like the slasher genre. I like the Halloween stuff as it's far less supernatural than the other things out there.. Michael is basically unstoppable, although not invincible. Anyone else seen it? It's got some good kill scenes in it. Obviously.
Comment