Administrator
..seriously, how did this buffoon become our PM? 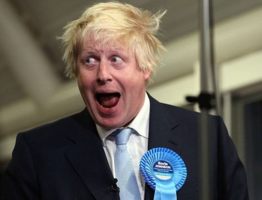 Whilst I may not be his biggest fan, as previously stated - I certainly don't envy the tough tenure he's had with the pandemic. Has he made the right decisions? It continues to be up for debate, and I suppose time will tell.. Personally I feel that the first lockdown should have arrived a week or two earlier than it did, as should the third; I feel it was correct to allow us to have Christmas with our families, but the decision should have been made that we would enter lockdown straight after Boxing Day. However...

I completely disagree with Brexit and feel that it should have been reversed - but Boris (eventually) saw through his objective to get it passed in parliament. I can't really say much more since I don't understand the ins and outs of it all, and nor do I have much interest in doing so. The whole idea was sold on lies, and it will be the same old story with the tories where it benefits those with money and impoverish those who are already struggling.

Some of the remarks he has made both prior to and during his tenure have been nothing short of bigotry, and I don't doubt for a second he has made the recent 'bodies pile high' remark despite him denying it. If it can be proved that he did, he should absolutely be dismissed from office.

Media team
I absolutely agree with you there Andy. Boris Johnson is an absolute weapon of a human being. He has no morals at all and ultimately should be removed from office as soon as possible.

I don't envy him the job in these circumstances, but he is just a blithering idiot and I can't believe the Tory party voted for him as their leader in the first place.

"Let the bodies pile high" is absolutely something you could hear that man saying and not be surprised about it.
Comment

He is awful. Any person that supported Remain but switched sides because it would easier to win an election that way is not to be trusted really. The UK has done well recently with the way they have handled certain things related to the pandemic, the vaccination program especially but I feel like there is other people within the government that probably helped contribute to that and not him.
Comment
Share:
Facebook Twitter Reddit Blogger LinkedIn Pinterest Tumblr WhatsApp Telegram Skype Email Share Link
Top