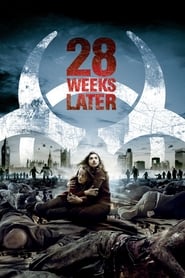 28 Weeks Later
When days turn to weeks... the horror returns.

Plot: The inhabitants of the British Isles have lost their battle against the onslaught of disease, as the deadly rage virus has killed every citizen there. Six months later, a group of Americans dare to set foot on the isles, convinced the danger has come and gone. But it soon becomes all too clear that the scourge continues to live, waiting to pounce on its next victims.

I really enjoyed 28 Weeks Later, even though it wasn't as good as the original movie imo, I think it stands as its own movie for sure. This movie has a pretty decent cast too, I haven't watched it since it came out, so I forgot Jeremy Renner, Imogen Poots, and even Idris Elba was in it. I don't remember if they were part of the main cast though, but I could be wrong. I need to re-watch it.

Anyway, what did you think of this movie? Did you think it lived up to the first movie? Or maybe you thought it was better?
Comment